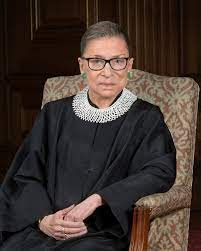 Ruth Bader Ginsburg died on Sept. 18, 2020, peacefully surrounded by family. Her life was not an easy one, but a one where she always took the better route, no matter the footing, no matter the time, and no matter the who.

She stood up for what she believed in- what she thought was right. She fought for the rights of those who did not have the civil liberties they deserved, those who had no voice, and made sure they had a voice in the future, the same voice you hear or are speaking with today.

She stood up for the indispensable need for human rights, the rights for all people, for immigrants, for women, for LGBTQ, and for minorities. She was a liberal icon, but also a centrist who brought people together when they most needed it, when the country most needed it, and in the divided time that we live in right now, that might have been the thing we needed the most.

Ms. Bernas, IMC supervisor, said that more than that, Ginsburg was an inspiration to others.

“I would say her lasting impact on the US is to encourage every girl, young woman and grown woman to pursue her dreams,” Bernas said. “Justice Ginsburg went to Harvard Law School at a time when only 9 women were admitted among about 500 men. She was a role model for women everywhere, and she possessed a moral compass along with mental toughness.”

“She has made me reflect on courage and goal setting for myself because she was the only female in her graduating class of male counterparts,” he said.

“I truly believe she is best known for being whip smart, willing to fight for what she believes in, and a person who did not show anger, but worked to make change (most likely channeling her anger into her legal work),” Bernas said.

We lost a shining star that day, but that star will keep on shining out in our history books and in our hearts; her love for peace and impartiality will keep on changing the world for the better bit by bit by bit, and encourage us to do the same.

No matter who you are, where you are, and what you are doing, stop and be truly inspired by this hero and all she has tirelessly worked for in this world.  Then take that energy and take that zeal and put it to making our community just a little bit better, a little less divided, and a little more united world just as Ginsburg did throughout her entire life.